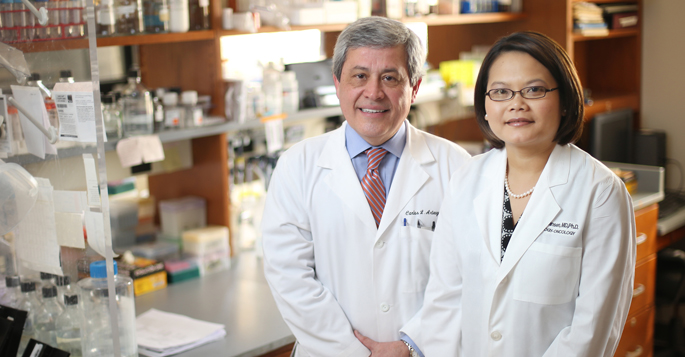 Jansen gave an oral presentation on mechanisms of resistance to CDK4/6 inhibitors in hormone receptor-positive breast cancer. CDK4 and CDK6 are proteins involved in the regulation of the cell cycle pathway. Inhibition of CDK4 and CDK6 results in cell cycle arrest, thus preventing the proliferation of cancer cells.

She has also been recognized by the Tennessee Oncology Practice Society (TOPS), a chapter member of the Association of Community Cancer Centers. Jansen received a TOPS award in conjunction with a presentation at the ACCC conference in Nashville.

Her research efforts are also supported by the Vanderbilt-Ingram Cancer Center Brock Family Fellowship which was endowed by John F. Brock III, his wife Mary, and their three children, in memory of Brock’s mother, who practiced healthy lifestyle habits but died from lung and colon cancer.

“I am deeply honored and humbled by these recent awards and grants,” Jansen said. “They would not have been possible without support from my mentor and colleagues in the laboratory. I am grateful to the Brock family for their support of my research endeavors in breast cancer.”

Jansen performs research in the laboratory of Carlos L. Arteaga, M.D., Donna S. Hall Professor of Breast Cancer, director of the Center for Cancer Targeted Therapies and the Breast Cancer Program, and associate director for Clinical Research at VICC. Arteaga just completed a year as president of AACR, the largest and oldest cancer research organization in the world.

“In addition to being an outstanding clinician, Valerie is a most promising physician-scientist. Her discovery of mechanisms of acquired resistance to CDK4/6 inhibitors has important clinical implications for patients with ER-positive breast cancer, where a drug of this type was just approved by the FDA,” Arteaga said.

In 2010, Jansen enrolled in the Physician-Scientist Training Program at Vanderbilt, where she completed her medical internship and residency.

Her research efforts are focused on identifying novel combination therapies for breast cancer and the mechanisms that lead to drug resistance.