The new research, led by first author Daniel Barocas, M.D., MPH, assistant professor of Urological Surgery and Medicine, was posted online in the June 15 issue of The Journal of Urology in advance of publication. 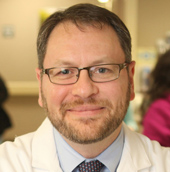 In October 2011, the USPSTF issued a draft guideline discouraging the use of prostate-specific antigen (PSA)-based screenings for prostate cancer after concluding the harms outweigh potential benefits. Harmful side effects of treatment may include incontinence, erectile dysfunction and radiation cystitis.

However, the “grade D” recommendation was considered controversial because of uncertainty about the risk-benefit ratio of screening since prostate cancer is the second leading cause of cancer death among men in the U.S., with nearly 30,000 deaths annually, and some studies show that screening saves lives.

To assess the effects of this recommendation, the investigators identified new cancers diagnosed between January 2010 and December 2012 in the National Cancer Database. They studied the trend of prostate cancers diagnosed each month before and after the draft guideline, compared with new colon cancer cases.

The research revealed that 12 months after the draft USPSTF guidelines were published diagnoses of new low-risk cancers had fallen by 37.9 percent while colon cancer cases remained stable.

New prostate cancer diagnoses also declined by 23 to 29.3 percent among men over age 70 and 26 percent among men considered infirm. The authors note these are populations who are unlikely to live long enough to benefit from early detection and are at risk of harms of treatment.

However, the investigators suggest that withholding screening may also result in failure to detect higher-risk cancers during the window of curability. Timely treatment of intermediate and high-risk localized disease is associated with superior overall survival, disease-specific survival and decreased spread of the disease to other locations in the body.

The study identified a drop of 28.1 percent in diagnoses of intermediate-risk disease and 23.1 percent in high-risk prostate cancer one year after the draft guideline. The decline did not vary across age or comorbidity features.

“These findings suggest that reduced screening may result in missed opportunities to spare these men from progressive disease and cancer death,” said Barocas.

While the observation period was too limited to determine the impact on the diagnosis of metastatic prostate cancer, which is associated with a high treatment burden, decrease in quality of life and increased mortality, the authors did observe a small upward trend in diagnoses of non-localized disease.

“The results raise concern that if this trend continues more men may be diagnosed at a point when their disease is advanced. Younger, healthier men with intermediate or high-risk disease would normally be candidates for aggressive local therapy and they may not be receiving a timely diagnosis under this policy,” said ­­­­­­­­­­­­­­­­­­­­­­­­­­­­­­­­­­­­­­­­­­­Barocas.

The authors suggest that future research should focus on screening regimens that minimize harms and maximize potential benefits of screening, while also considering patient preferences.