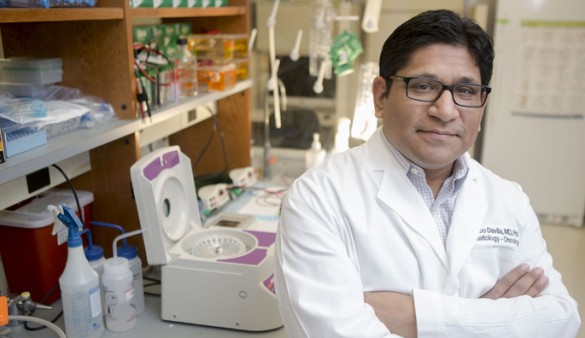 Marco Davila, M.D., Ph.D., assistant professor of Medicine and of Cancer Biology, has received a grant from the Damon Runyon Cancer Research Foundation that will provide $450,000 over three years to help fund his research on therapies for several types of blood disorders, including various forms of leukemia and non-Hodgkin (also known as non-Hodgkin’s) lymphoma. Davila’s current research focuses on the body’s immune system.

“Some people would argue that cancers that develop are, in part, a failure of the immune system,” said Davila.

Normally the body’s immune system defenses should recognize and attack cancer cells, but scientists have discovered mechanisms that throw up a screen, making the cancer cells invisible. The immune system uses white blood cells, or lymphocytes, which originate in the bone marrow. The lymphatic system includes T cells and B cells which have receptors on their surface that can recognize invaders. Davila said B cells have a protein called CD19 which is present in almost all B cell malignancies like leukemia.

Prior to joining Vanderbilt in 2014, Davila and colleagues at Memorial Sloan Kettering Cancer Center in New York created an antigen receptor that would recognize and lock onto CD19.

“By genetically modifying T cells to CD19 we created a huge bulk population of cells that are now going to be reactive to this B cell target,” said Davila.

They tested this CAR T antigen receptor in mouse models and in some patients with relapsed ALL (acute lymphocytic leukemia) with remarkable results.

“This is a disease where with standard salvage chemotherapy the survival rate would be 20 to 30 percent. In the patients we treated the complete response rate was nearly 90 percent,” Davila said.

However, the CAR T cell therapy was not as effective with CLL (chronic lymphocytic leukemia) or non-Hodgkin diseases. Davila and colleagues believe CLL is immune resistant to CD19-targeted CAR T cell therapies.

He is hoping to develop an “armored CAR” third generation that will be resistant to immune suppression within the lymph node or the tumor microenvironment.

“We’re engineering the cells in a way to be able to activate themselves and avoid immune suppression within these lymph nodes in the hostile tumor microenvironments.”

Davila said support from the Damon Runyon Cancer Research Foundation is critical for this project and he is excited about the “luminaries of cancer research” working with the foundation who will be monitoring his project and helping him troubleshoot any barriers to the translation of his research.

The foundation is named in honor of Damon Runyon, a journalist and short story writer active in the early part of the last century who was renowned for his humorous sports coverage and creation of colorful characters from the sports, horse racing and gambling worlds.  Since 1946, the Foundation has invested more than $287 million dollars in innovative cancer research, supporting the work of more than 3,400 cancer investigators.