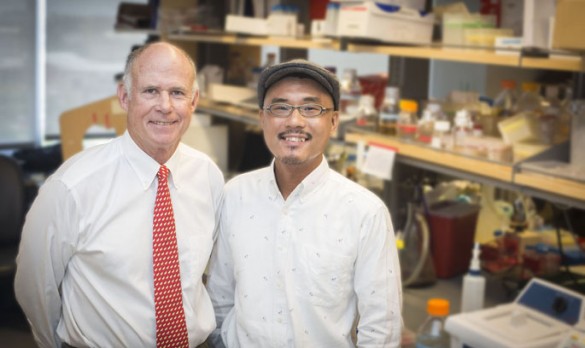 Robert Coffey, M.D., left, Jumpei Kondo, Ph.D., and colleagues are studying a protein’s role in the development of specialized cells that control smooth muscle contraction in the stomach, small intestine and colon. (photo by Susan Urmy)

The gut has its own built-in pacemakers, populations of specialized cells that control smooth muscle contraction in the stomach, small intestine and colon.

If these cells fail to develop or if they malfunction, digestion is slowed, nutrient absorption is impaired, and a wide range of gastrointestinal disorders can result.

Now Vanderbilt University scientists have discovered that a cell surface protein called LRIG1 is essential for development of subpopulations of these pacemaker cells, and for normal motility or movement of food through the small intestine.

In mice lacking LRIG1, these pacemakers do not form and intestinal motility is significantly delayed, they report in the August issue of the journal Gastroenterology. LRIG1 thus may be a key to better understanding and treating disorders of gut motility, they conclude.

In conditions like diabetic gastroparesis, in which the stomach doesn’t empty properly, a subpopulation of ICC “pacemaker” cells may be lost or dysfunctional. “If you now had a way of coaxing smooth muscle cells to develop into ICCs, (theoretically) you could restore their function,” Coffey said.

Coffey and his colleagues have been studying LRIG1 for several years. In 2012 they reported in the journal Cell that LRIG1 is a marker of intestinal stem cells, and also acts as a tumor suppressor. More than 90 percent of mice lacking LRIG1 in their study developed duodenal tumors.

Then postdoctoral fellow Jumpei Kondo, Ph.D., who is first author of the Gastroenterologypaper, discovered LRIG1 in cells below the crypts, the finger-like glands in the mucosal lining, or epithelium of the gastrointestinal tract.

This implied that LRIG1 may also be doing something in the underlying muscle layer. Sure enough, mice lacking LRIG1 “have significantly delayed intestinal transit,” Kondo said. The next step, he said, is to find out whether removal of LRIG1 after development will cause these pacemaker cells to disappear.

“This is a very important body of work that has opened several new fields, because nobody knew where this subpopulation of ICCs came from, and (Kondo) figured it out,” said Coffey, who also is professor of Medicine and of Cell and Developmental Biology and director of the Epithelial Biology Center.