With a basketball tucked under his arm, 7-year-old Roger Waynick climbed on top of his dad’s black Tahoe SUV with the intention of sailing upward through the air toward the basketball goal. He was poised to make the most epic dunk ever.

Instead he fell to the ground.

“I was told that my dad administered CPR until LifeFlight landed in our neighborhood and that I flatlined three times during the helicopter ride,” said Waynick, now 25. “They called me a miracle because I was back at home in only two days.

“Ever since then my family has been supporters of the hospital.”

A year after graduating from college Waynick returned home. He found a job, but wanted to become involved in the community. He found SEYA — the Southeastern Young Alumni Charitable Foundation. Founded in 2008, the group raises money for pediatric cancer research at Monroe Carell Jr. Children’s Hospital at Vanderbilt.

“With SEYA you can advance your career goals and have a good time, but there is a much higher purpose — and that is to do something good for the community.“It was a great fit for me,” said Waynick. “People think my age group seems self-centered and self-serving and gets involved with organizations to network and look for our next job opportunity.

“It’s encouraging to see young professionals coming together for the greater good — to help give kids an opportunity to fulfill their own dreams,” he said. “It’s cool to see people my age step up and be committed to something bigger than ourselves.” 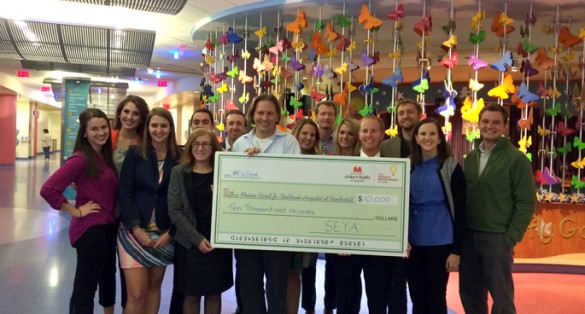 The Southeastern Young Alumni Charitable Foundation has donated more than $160,000 for pediatric cancer research at Monroe Carell Jr. Children’s Hospital at Vanderbilt since it was founded seven years ago.

Each year SEYA hosts two events to raise funds for the pediatric oncology program at Vanderbilt. The 6th Annual College Football Kickoff Party, its biggest event, is set for Aug. 28 at 1516 Demonbreun St. For ticket information go to www.SEYAnashville.com. Nearly 2,500 party-goers are expected.

The group’s black-tie gala, the Affair to Care, is held during the winter months. Organizers are hoping to raise $40,000 with both fundraisers. To date SEYA has donated more than $160,000 to Vanderbilt.

“On average we are able to give about $25,000 a year to Vanderbilt,” said Matthew Harrison, serving in his second term as the president of SEYA. “After six years of donating to the research endeavors for pediatric cancers, we know that the more money we raise the more we will be able to impact the research efforts at Children’s Hospital.

“Today, everything is instant, instant, instant,” he said. “It can make it hard when you are raising money for something you cannot readily see. We don’t see an immediate response from the money we generate, but at the end of the day we are building something that is bigger than ourselves and will far outlast us.”

AYA patients, ages 15 to 39, require an integrated, highly specialized care that crosses the adult and pediatric disciplines of medicine, said Borinstein, director of the AYA program at Vanderbilt.

There are approximately 550 new AYA cases a year.

“This is a very vulnerable patient population,” said Borinstein. “There is a lot of room to improve treatments and resources for this group of patients and that will require that we build programs around their unique needs and modify the paradigms.

“We are building a program at Vanderbilt that really is one of the top in the nation in taking care of AYA patients — providing state-of-the-art clinical care as well as innovative supportive care backed by research endeavors to improve outcomes.

“I am looking forward to the next few months — there are a lot of exciting things happening for our program.”

Teaming up for cancer

Across Middle Tennessee people are joining forces in the fight against cancer. Whether it’s a football-themed party or an evening soiree, communities are hosting events to raise money for cancer research and support the day-to-day expenses of patients battling cancer. 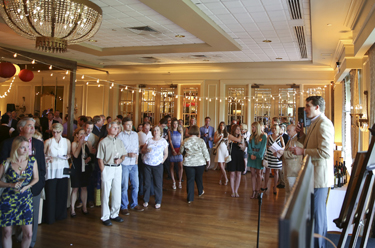 Team Chad was established in memory of Chad Welch, who died from leukemia in 2007. It has raised nearly $700,000 in eight years through two annual events — a wine tasting and auction called Sip, Support and Celebrate, the less formal football-themed barbecue, Pigs and Pigskins, and a tailgate party held at a University of Tennessee home game.

“People are in the midst of healing,” said Klekamp. “But what’s occupying their thoughts (instead of recovery) are the bills. We want healing to be their focus. Team Chad wants to ease some of their burdens of being behind on rent or utilities or not knowing how they are going to pay for groceries or get back and forth to their appointments.”“He was overwhelmed by the need,” said Ashley Klekamp, Chad’s older sister. “It was a topic of conversation pretty much all the time. Being sick can financially devastate a person or a family. “They are trying to keep up with utility bills, put gas in the car, pay rent or a mortgage and other expenses while dealing with the medical responsibilities that cancer has created.

Team Chad has worked in concert with Hematology Helping Hands at Vanderbilt to purchase necessary items for the adult oncology clinic and inpatient unit including flat-screened TVs, iPads and exercise equipment.

In 2014, the group elected to give a portion of the proceeds from its fundraising efforts to research.

“We felt that research was another way of impacting patients,” said Klekamp. “We like tangible items like gift cards and house payments, but giving money to aid in research is another important way to make a difference in patients’ lives.”

She received a $13,000 grant from the group to study how patients metabolize a key medication used to prevent Graft vs Host Disease (GVHD) after stem cell transplantation.

The project examines the optimal dosing of Tacrolimus, an immunosuppressive drug used after allogeneic transplants to reduce the risk of rejection.

“We are seeing patients who metabolize the drug very quickly and the drug is not reaching optimal levels,” said Krupski. “We want to use genetic testing to determine how medication is metabolized so that we can make appropriate dosing adjustments.

“Without sufficient dosing of Tacrolimus, patients can experience negative outcomes and long-term complications. GVHD is responsible for a good portion of morbidity and mortality in a post transplant patient.”

Krupski hopes that her research allows individualized Tacrolimus dosing based on genomics, which in time can be applied to multiple patient populations worldwide.