The 2015 grants will provide nearly $600,000 over three years for the two VICC investigators for their individual breast cancer research projects.

They are among 124 researchers in 25 states and eight countries to receive the 2015 Komen grants, with about half of the grants targeted to early-career researchers. This group has been hit especially hard by declines of as much as 25 percent in federal research funding over the past decade.

Each year, nearly 230,000 women and 2,300 men are diagnosed with breast cancer, which is the second leading cause of cancer-related deaths among women.

“The Susan G. Komen organization has provided tremendous support for our breast cancer research at VICC, from basic, to clinical, to population studies that impact our patients in the clinic and individuals in the community,” said Pietenpol, who is a Komen Scholar.

“This continued source of financial support has been crucial for our discoveries about the biological mechanisms that spur cancer growth, as well as new rationales for therapeutic options for the disease.”

Pietenpol is investigating the causes and potential treatments for triple-negative breast cancer (TNBC), which is more common among African-American women and those with BRCA1 mutations. Triple-negative tumors lack receptors for the hormones estrogen and progesterone, as well as amplifications in the HER2 gene, and they do not respond to current targeted therapies.

The new funding will allow Pietenpol’s group to focus on analyzing tumor tissue from patients enrolled in a novel clinical trial to determine if a set of genomic markers can predict sensitivity or resistance to the drugs tested in the trial. The trial will help investigators understand why specific patients respond to treatment while others don’t and to find better methods to target those resistant tumors. 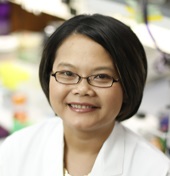 Jansen, who works in the laboratory of Carlos Arteaga, M.D., director of the Center for Cancer Targeted Therapies and the Breast Cancer Program at VICC, is investigating breast cancers that depend on estrogen for growth. These estrogen receptor (ER)-positive tumors usually respond to therapies that block the ER function. However, after an initial response to treatment, many ER-positive tumors develop resistance and start growing again.

Jansen is investigating promising new therapies that focus on CDK4 and CDK6 proteins that are involved in the regulation of the cell cycle pathway. Inhibiting CDK4 and CDK6 prevents the proliferation of cancer cells, but resistance is also a problem with these therapies. Jansen is investigating the role of another protein (PDK1) in combination with CDK4/6 inhibitors as a novel treatment strategy for ER-positive cancers.

The 2015 grant awards bring Komen’s total research investment to more than $889 million since 1982, second only to the U.S. government. Grants from Komen’s nearly $36 million research portfolio — including more than $17.6 million in grants awarded to early-career investigators — span the entire cancer continuum from prevention to treatments for aggressive and metastatic disease.

Next Post: Reduced-nicotine cigarettes decreased dependence and frequency of smoking