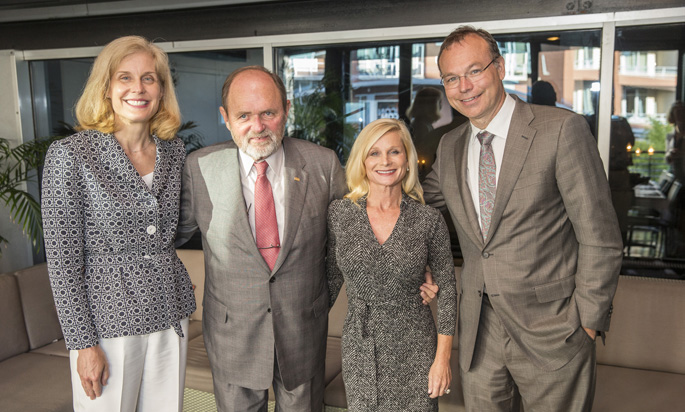 Within nine years, the gift, which established the Jim Ayers Institute for Precancer Detection and Diagnosis at the Vanderbilt-Ingram Cancer Center (VICC), had yielded an impressive return: identification of protein “signatures” of the genetic mutations that drive the nation’s second leading cancer killer after lung cancer.

“You can argue that it’s now within our grasp to change the outcome for patients with several types of cancers because of the knowledge gained,” said VICC director Jennifer Pietenpol, Ph.D. “It was money well invested.”

Liebler is leaving Vanderbilt early next year to establish a cancer diagnostics company, Protypia, based on the protein analysis technology he and his colleagues have been developing since he arrived at Vanderbilt University Medical Center 12 years ago.

Pharmaceutical companies are rushing to develop new, more effective cancer drugs that target specific features of individual tumors, what Pietenpol calls precision oncology. But “you need a molecular test to determine which features a patient’s tumor has and which drug is the best match,” Liebler explained.

The research enabled by the Ayers Institute provided the “proof of concept,” he said. It “convinced us that it’s time to develop protein-based diagnostics that would guide new cancer therapeutics.”

Meanwhile, the work at Vanderbilt continues, in genomics as well as proteomics, imaging and bioinformatics, the development of techniques for handling huge amounts of data.

“Now we can begin to piece together part of the puzzle we never had before,” said Pietenpol, the Benjamin F. Byrd Jr. Professor of Oncology.

Success in science requires people who ask good questions and are passionate about making change. “That’s Dan Liebler,” she said. “That’s the Ayerses. Together, they did things far beyond our ideas when the institute was formed. That’s the real gift of the Ayers Institute.”

The seed for the Ayers Institute began about 12 years ago during a conversation Jim Ayers had with friend and fellow philanthropist Orrin Ingram, chair of the VICC Board of Overseers.

“I told him … I would love to have the satisfaction of knowing that I had contributed something to mankind that might actually save a lot of lives,” recalled Ayers, who created the Ayers Foundation in 1999 to improve the quality of life for Tennesseans.

Within a year, Ingram brought back a proposal to invest in the search for blood markers that could diagnose colorectal cancer early.

Ayers said he knew it was a long shot, a bit like pouring a soft drink into the headwaters of the Mississippi and trying to detect it more than 2,300 miles downstream in New Orleans.

“Sometimes the early work is the most difficult to fund,” added Janet Ayers, former president of the Tennessee Health Care Association who married Jim in 2006 and now heads up the Ayers Foundation. “We feel like we’re the venture capitalists in this.”

A year later, in 2006, the National Cancer Institute joined the effort, and launched the Clinical Proteomic Tumor Analysis Consortium (CPTAC), an ambitious, multi-center effort to identify abnormal patterns of protein regulation that could distinguish cancers from normal tissues.

Vanderbilt was one of five centers to receive an initial CPTAC grant, $8 million over five years, and has continued to be funded through the current fiscal year. The NCI recently renewed CPTAC for another five years, “due in significant part to our success,” Liebler said.

Liebler and his team analyzed hundreds of samples of colon tissue removed during colonoscopies and, by comparing normal to cancerous tissue, looked for protein markers that were unique to tumors. Bing Zhang, Ph.D., associate professor of Biomedical Informatics, developed algorithms for analyzing the data.

The high point for institute scientists was the publication in 2014 of their findings in the journalNature. The technological tour de force was described at the time as the first integrated “proteogenomic” characterization of human cancer.

“One of our major accomplishments was to show that proteomics can identify subtypes of colon cancers and especially subtypes that are associated with poor outcomes,” Liebler said.

The proteins elevated in colon tumors did not get into the bloodstream in high enough levels to be detectable “bio-markers” for cancer but, said Jim Ayers, “we knew this thing wasn’t a slam dunk. Nothing is a slam dunk.”

Nevertheless, Pietenpol said several key scientific advances came out of the institute, including:

The Ayers Institute also attracted an estimated $125 million in funds from the federal government, pharmaceutical companies and private foundations that supported the research of more than a dozen Vanderbilt investigators.

There are many examples of private money fueling basic biomedical research but, said Liebler, “if you want to look at the private money to launch a focused program just in cancer diagnostics development by proteomics, the Ayers Institute was the first.”

“Our collaborative work at the Ayers Institute has enabled proteomics to join the force in the fight against cancer,” he wrote.

“Together, we are moving closer to the ultimate goal of the Ayers Institute, which is to save lives and prevent suffering due to cancer.”

When asked if they would invest in the research again, knowing what they know now, the Ayerses responded with an enthusiastic “yes,” because they said Vanderbilt is such a strong scientific partner.

As for their next project, they said they are investigating a couple of proposals for medical research, as well as education. “We do our homework on the front end, we are engaged throughout the process and we are looking for benchmarks and milestones,” Janet Ayers said.

“It’s been a really great extension of our marriage,” she added. “We’re working on things together. It just makes you that much closer.”