A microRNA — a small piece of RNA involved in regulating gene expression — functions as an oncogene to drive the development of lung cancer, Vanderbilt University investigators have discovered.

The microRNA, known as miR-31, is expressed at high levels in human lung adenocarcinoma, and its expression correlates with reduced patient survival, said Christine Eischen, Ph.D., professor of Pathology, Microbiology and Immunology. 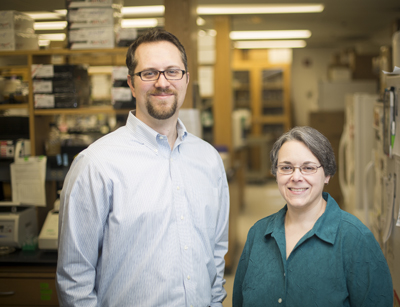 “We discovered that miR-31 is an independent survival factor, meaning that its expression impacts survival, independent of other factors such as tumor size, tumor burden and tumor location,” Eischen said. “That suggests it’s very important.”

The findings, reported in the January issue of the Journal of Clinical Investigation, demonstrate that miR-31 can initiate and promote the progression of lung cancer, and they suggest that targeting miR-31 may offer a new strategy for treating lung cancer.

Eischen and her colleagues became interested in microRNAs when the small molecules were linked to cancer about ten years ago. The group had been focused on traditional oncogenes — protein-encoding genes that have the potential to cause cancer. They decided to expand their studies to explore microRNAs.

MicroRNAs are short pieces of RNA that are transcribed (copied) from DNA, but they do not code for proteins. They interact with messenger RNA (mRNA) molecules to reduce protein production.

“MicroRNAs mediate another level of regulation of gene expression — after the mRNA is made, microRNAs can inhibit protein expression,” Eischen said.

The microRNA miR-31 had been linked to multiple cancers, including cancers of the breast, ovary, prostate, bladder and skin, where its levels were reduced, suggesting that it normally functions to suppress tumor development.

At the time, Eischen explained, it was unclear that the same microRNA could have different functions in different cells.

“We thought it was interesting that miR-31 was increased in lung cancer, so we started screening lung adenocarcinoma cell lines and patient samples, and it was increased in most of them,” she said. “These results suggested miR-31 might be an oncogene. Since we are experts in characterizing oncogenes, we tested the function of miR-31.”

In cultured normal lung cells, elevated levels of miR-31 increased both proliferation and cell transformation to tumor-like cells. Elevated miR-31 increased the growth of adenocarcinomas resulting from injected cultured human lung cancer cells in a mouse model. In every test, miR-31 behaved as an oncogene.

Thomas Andl, Ph.D., a former Vanderbilt faculty member, had developed a mouse model in which miR-31 expression could be induced. In collaboration with Andl, the researchers induced miR-31 only in the lungs.

“Within two months, we saw hyper-proliferative lesions in the lungs, which was exciting since oncogenes do that,” Eischen said. “When we left miR-31 on for longer and longer periods of time, we saw the formation of adenomas (benign tumors) and then lung carcinomas.

“Mick and I were thrilled with these results because no one had previously shown a microRNA could induce cellular transformation in the lung and cause cancer to develop.”

Mutations in the gene KRAS that activate the RAS pathway cause lung cancer, and the researchers also found that miR-31 accelerates lung tumorigenesis in mice with KRAS mutations.