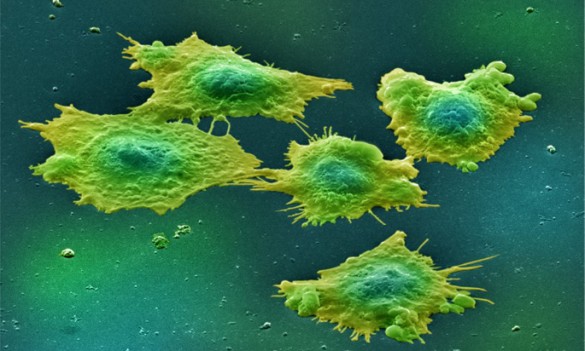 A protein that suppresses a key cancer pathway in the colon may be a potential biomarker for colitis-associated tumors, researchers at Vanderbilt University Medical Center reported last month in the journal Gut.

The protein, called blood vessel epicardial substance or BVES, also may be a new therapeutic target for cancers in the colon and elsewhere, they conclude.

More study is needed, but “I think this has a lot of implications not only for colon cancer but cancer in general,” said first author Bobak Parang, Ph.D., a third-year medical student in the Vanderbilt Medical Scientist Training Program. “It’s very likely that BVES regulates tumor formation in other organs.”

Colitis-associated cancer (CAC) is a type of colon cancer preceded by inflammatory bowel disease. If the colon is affected by IBD there is a tenfold higher risk of developing CAC, yet early, tiny cancerous lesions are hard to detect in patients with inflamed bowels using the standard screening method of colonoscopy.

“Once patients have had IBD for eight to 10 years, they undergo surveillance colonoscopies every one to two years,” said Christopher Williams, M.D., Ph.D., associate professor of Medicine and Cancer Biology and the study’s co-corresponding author with William Grady, M.D., at the University of Washington in Seattle. During the procedure, up to 40 biopsies — tiny bits of tissue as big as the tip of a pen — may be taken. “We hope we’ll detect cancer, if it is there, with biopsies, but the surface area of the colon is roughly the size of a ping-pong table,” Williams said. “So cancer can be very difficult to identify with this method.”

In 2011, Williams and colleagues reported that the BVES gene is underexpressed or “turned down” in cancers of the epithelial lining of the gut through a process known as hypermethylation, excessive binding of methyl groups to the DNA.

In the current study, they confirmed that BVES is underexpressed through hypermethylation in patients with CAC compared to those with normal colon tissue. They showed that deletion of the gene in mice promoted development of the cancer.

Notably, they found that blocking BVES gene expression in cell culture increased levels of c-Myc, a transcription factor which is overexpressed in 50 percent of all cancers. Moreover, they found that BVES interacts with a large complex of proteins that regulate c-Myc and promote c-Myc destruction.

The researchers concluded that BVES suppresses colitis-induced tumorigenesis by causing the degradation or breakdown of c-Myc proteins. Without BVES, c-Myc levels rise.

If BVES hypermethylation proves to be a reliable biomarker of early cancer in patients with IBD, doctors could perform rectal biopsies using flexible sigmoidoscopy, thus avoiding the need for frequent colonoscopies unless the biopsy comes back positive, Williams said.

Demethylating agents have not been shown to be very effective in treating patients with colon cancer. Perhaps “you need to use them in the right subset of patients who have hypermethylated BVES,” he said.