AUBURN, Ala. (March 15, 2016) – The Chicken Salad Chick Foundation has named Vanderbilt-Ingram Cancer Center (VICC) as one of the beneficiaries of funds raised at the inaugural Music & Miracles Superfest.

The mission of Music & Miracles Superfest is to bring the biggest entertainers in America to one of the most notable venues in the Southeast. Proceeds from the concert will be targeted to fighting cancer and feeding the hungry. 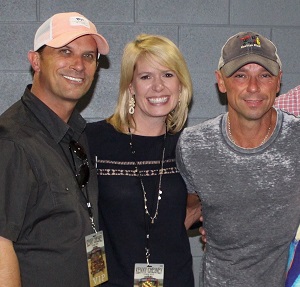 Stacy Brown, President and Co-Founder of the Chicken Salad Chick Foundation, who lost her husband Kevin Brown (Co-Founder of Chicken Salad Chick) to cancer last November, noted “Music & Miracles Superfest was Kevin’s dream. While in the midst of his battle against cancer, Kevin chose not to ask ‘why me?’ but rather ‘why not?!’  Kevin asked boldly, ‘Why not start a Foundation? Why not have a concert at Jordan-Hare Stadium? Why not ask Kenny Chesney to play it? And why not try and raise a million dollars in a single day to give to those who are in need?’ Kevin will have the best seat in the house to watch this dream come true on April 23.”

The CSC Foundation Board identified Vanderbilt-Ingram Cancer Center, one of the top 10 cancer centers in America in grant support, to be one of the concert beneficiaries. As a leader in new discoveries in cancer research, VICC’s world-renowned team of experts provides an integrated, personalized and patient-centered approach to cancer care, including treatment, research, support, education and outreach.

Scott Hiebert, Ph.D., Associate Director of Basic Science Research and Shared Resources at VICC, said, “We are so honored to be named one of the beneficiaries of this one-of-a-kind concert. We thank Stacy Brown and the entire CSC Foundation and Board for their belief in the innovative work being done at VICC. We wake up every day and dream big as we strive to make landmark discoveries and breakthroughs in cancer research. Our goals align perfectly with Kevin Brown’s legacy and the mission of Music & Miracles.”

About the Chicken Salad Chick Foundation:

The Chicken Salad Chick Foundation was established by Kevin and Stacy Brown in June of 2014. As the founders of the Chicken Salad Chick restaurant concept, they knew very early on they would have the opportunity to positively impact many lives. The foundation focuses on two initiatives, fighting cancer and feeding the hungry. Music & Miracles Superfest is all about BIG DREAMS. HIGH HOPES. TREMENDOUS IMPACT.

Learn more about the Chicken Salad Chick Foundation at: www.chickensaladchick.com/chicken-salad-chick-foundation

About the Vanderbilt-Ingram Cancer Center: