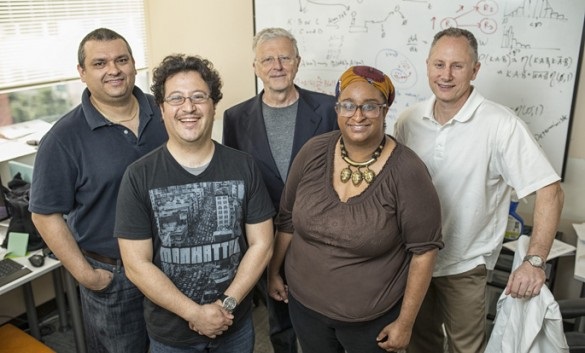 The primary method used to test compounds for anti-cancer activity in cells is flawed, Vanderbilt University researchers reported May 2 in Nature Methods. The findings cast doubt on methods used by the entire scientific enterprise and pharmaceutical industry to discover new cancer drugs.

“More than 90 percent of candidate cancer drugs fail in late-stage clinical trials, costing hundreds of millions of dollars,” said Vito Quaranta, M.D., director of the Quantitative Systems Biology Center at Vanderbilt. “The flawed in vitro drug discovery metric may not be the only responsible factor, but it may be worth pursuing an estimate of its impact.”

Quaranta and his colleagues have developed a new metric to evaluate a compound’s effect on cell proliferation — called the DIP (drug-induced proliferation) rate — that overcomes the flawed bias in the traditional method.

For more than 30 years, scientists have evaluated the ability of a compound to kill cells by adding the compound to cells and counting how many cells are alive after 72 hours. But these “proliferation assays” that measure cell number at a single time point don’t take into account the bias introduced by exponential cell proliferation, even in the presence of the drug, said Darren Tyson, Ph.D., co-author and research assistant professor of Cancer Biology.

“Cells are not uniform; they all proliferate exponentially, but at different rates,” said Quaranta, professor of Cancer Biology. “At 72 hours, some cells will have doubled three times and others will not have doubled at all.”

In addition, he noted, drugs don’t all behave the same way on every cell line — for example, a drug might have an immediate effect on one cell line and a delayed effect on another.

In a close collaboration with computational biologist Carlos Lopez, Ph.D., assistant professor of Cancer Biology, Quaranta’s team used a systems biology approach — a mixture of experimentation and mathematical modeling — to demonstrate the time-dependent bias in static proliferation assays and to develop the time-independent DIP rate metric.

“Systems biology is what really makes the difference here,” Lopez said. “It’s about understanding cells — and life — as dynamic systems.”

The findings have particular importance in light of recent international efforts to generate data sets that include the responses of “thousands of cell lines to hundreds of compounds,” Quaranta said. The Cancer Cell Line Encyclopedia (CCLE) and Genomics of Drug Sensitivity in Cancer (GDSC) databases include drug response data along with genomic and proteomic data that detail each cell line’s molecular makeup.

“The idea is to look for statistical correlations — these particular cell lines with this particular makeup are sensitive to these types of compounds — to use these large databases as discovery tools for new therapeutic targets in cancer,” Quaranta said. “If the metric by which you’ve evaluated the drug sensitivity of the cells is wrong, your statistical correlations are basically no good.”

The researchers evaluated the responses of four different melanoma cell lines to the drug vemurafenib, currently used to treat melanoma, with the standard metric – used for the CCLE and GDSC databases — and with the DIP rate. In one cell line, they found a stark disagreement between the two metrics.

“The static metric says that the cell line is very sensitive to vemurafenib. However, our analysis shows this is not the case,” Harris said. “A brief period of drug sensitivity, quickly followed by rebound, fools the static metric, but not the DIP rate.”

The findings “suggest we should expect melanoma tumors treated with this drug to come back, and that’s what has happened, puzzling investigators,” Quaranta added. “DIP rate analyses may help solve this conundrum, leading to better treatment strategies.”

The DIP rate metric offers another advantage — it can reveal which drugs are truly cytotoxic (cell-killing), rather than merely cytostatic (cell growth-inhibiting). Although cytostatic drugs may initially have promising therapeutic effects, they may leave tumor cells alive that then have the potential to cause the cancer to recur.

Quaranta noted that using the DIP rate is possible because of advances in automation, robotics, microscopy and image processing.

His team has developed a software package that will be available to other researchers through a hyperlink in the Nature Methods paper. Quaranta is working with the Vanderbilt Center for Technology Transfer and Commercialization to identify commercial entities that can further refine the software and make it widely available to the research community to inform drug discovery.

Other contributors to the research included Shawn Garbett in Biostatistics, and Keisha Hardeman and Bishal Paudel, graduate students in the Quaranta laboratory. This research was supported by grants from Uniting Against Lung Cancer, the Vanderbilt Breast Cancer SPORE, the National Institutes of Health (CA113007, CA174706, TR000445), and by a National Library of Medicine Fellowship.