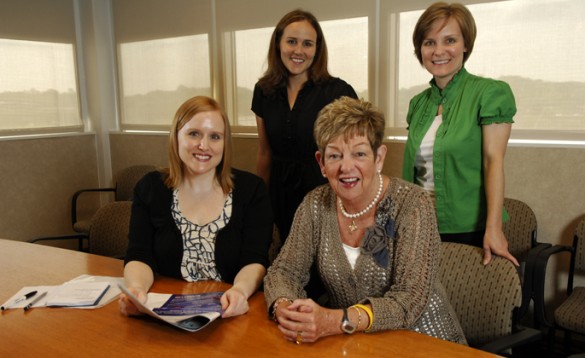 When former Nashvillian Carol O’Hare speaks about a specific group of physicians at Vanderbilt-Ingram Cancer Center (VICC), her voice softens, and she refers to them affectionately as “my fellows.”

O’Hare, a 19-year cancer survivor who received life-saving treatment at VICC and whose late husband was also treated for cancer here, decided to support oncology research by giving a substantial, ongoing donation to establish “The Carol and Jim O’Hare Fund.” Created in 2011, the endowed fund supports the training of Hematology/Oncology fellows. Currently, there are four donor-supported endowed funds supporting fellowships in hematology and oncology.

“The importance of fellowships cannot be overstated,” said Jill Gilbert, M.D., director of the Hematology/Oncology fellowship program. “Fellows bring fresh perspectives to our work, and we in turn have the opportunity to train the next generation of leading clinicians and researchers in the Vanderbilt tradition of inquiry, lifelong learning and compassionate patient care.

“As federal funding becomes scarcer, we look to philanthropic giving to support this essential part of our mission. We’re deeply grateful to donors who take the long view, helping launch the careers of tomorrow’s leaders in health care.”

O’Hare, who now sits on the VICC Board of Overseers, enjoys visiting the Preston Research Building on the VUMC campus and catching up on the research of her fellows, with whom she feels a very personal connection. She says that when she walks into the research building, she immediately feels an energy that she believes infuses cancer patients with hope.

“Bricks and mortar are fine, but it’s what’s going on inside the labs that really brings the bricks and mortar alive,” O’Hare said. “Ninety percent of the people cannot give to the level of having a building named after them. So, people might shy away and think, ‘What can my $1,000 do, or even what can my $25,000 do?’ That’s where the mindset needs to change. You can put money toward something that is important — you can support a researcher and their work. You can support a fellowship or a discovery grant. You don’t have to have a building in your name. It’s really just about giving and having that feeling that you’re making a difference.”

When O’Hare was diagnosed with stage 3 breast cancer in 1997, she was treated by David Johnson, M.D., then director of the Division of Hematology and Oncology, and Daniel Beauchamp, M.D., her surgeon. After a course of cutting-edge adjuvant therapy, a modified lumpectomy and complete nodal dissection and a full course of radiation, O’Hare has been cancer-free since August 1998.

Then, cancer dramatically changed the course of her life again in 2004 when her husband, Jim O’Hare, a prominent Nashville attorney, was diagnosed with stage IV lung cancer at VICC. He was very active, and a non-smoker, but when he developed a persistent cough, doctors discovered the cause was cancer. Less than a month later, he died from a pulmonary embolism, a complication resulting from his cancer.

Following her husband’s death, O’Hare said she was looking for a way to express her gratitudeand to contribute in a meaningful way to support the development of innovative cancer treatments.

Establishing an endowed fund to support a research fellowship at Vanderbilt made perfect sense, she said. One of the first physicians to receive the O’Hare Fellowship was Christine Lovly, M.D., Ph.D., who has gone on to become an assistant professor of Medicine and Cancer Biology. Lovly now heads her own lab at VICC, with six full-time lab members working on several oncology research projects.

“Training as a physician scientist engaged in translational research can be challenging, especially in the setting of a difficult National Institutes of Health funding period to support research,” said Lovly. “It seems that fewer physicians are training for research careers due to these struggles. It meant a lot to me that someone recognized that young investigators are really needed to spearhead the next generation of cancer research. Carol was engaged in and has been excited about my research projects since I was a fellow.”

Early in Lovly’s fellowship training, she worked alongside a medicinal chemist to develop a novel drug for the treatment of patients with anaplastic lymphoma kinase (ALK)-positive non-small cell lung cancer. That drug, known as X-396, will soon be in a multi-site Phase III clinical trial in the United States and around the world. This means the drug will be given to a large number of patients in a randomized trial to see if the treatment is more effective than existing treatments or with fewer side effects, or both.

Lovly said she is grateful for the environment of discovery at Vanderbilt that allowed her research to progress significantly to the point of actually getting a potential new treatment to patients.

“What we really want to do is to have bedside-to-bench and bench-to-bedside studies as the heart of the laboratory, always addressing important clinical questions and trying to move novel therapies or combinations of therapies, or novel genomic biomarkers in the clinical realm,” said Lovly.

“I am very grateful to the mentors and collaborators I have had at Vanderbilt who have helped to facilitate rapid translations of experimental studies into the clinic.”

It was an innovative approach to treating breast cancer that gave O’Hare back her life, and it’s watching her fellows bring new treatments such as X-396 closer to delivery to patients that gives her satisfaction now, she said.

“This is where it all begins,” O’Hare said. “The fellows I’ve had have been marvelous, and they are such an inspiration. It is a very rewarding part of my life that I can give back and help these researchers find answers to this terrible disease.”

Next Post: VICC investigators in spotlight at AACR conference