The National Institutes of Health, in partnership with StoryCorps, recently launched its “Voices of the NIH Community,” a collection of first-hand audio-recorded stories told by those connected with and impacted by the NIH and Vanderbilt University Medical Center communities. 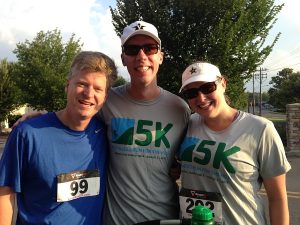 Two of the “voices” featured in the collection are that of Nashville’s EB Jackson and Reid Thompson, M.D., chair of the Department of Neurological Surgery at VUMC. EB’s husband, Todd, was successfully treated by Thompson for a brain tumor in 2003. Ten years later, Todd’s tumor recurred, and he was diagnosed with glioblastoma, the most aggressive form of brain cancer. Todd lived nearly 11 months after his second diagnosis before passing away in 2014.

In their moving segment titled, “It’s OK to Love a Patient,” EB and Thompson reflect on Todd’s life and passing. They also discuss the special bond between patients and their care providers as well as the importance of research and discovery, which was of particular importance to Todd and EB. In 2009, the couple founded and co-chaired the VICC Ambassadors to help raise seed funding for early stage high-risk, high-potential cancer research at Vanderbilt-Ingram Cancer Center. To date, the VICC Ambassadors have raised nearly $800,000 for discovery grants at Vanderbilt-Ingram.