Jonathan Lehman, M.D., Ph.D., instructor in Medicine in the Division of Hematology/Oncology, has received a Career Development Award from LUNGevity, a nonprofit organization that provides support programs for lung cancer patients and families, public education and funding for innovative scientific research.

The LUNGevity Career Development Awards program bolsters scientists early in their careers to foster their leadership development and stimulate their research through funding. 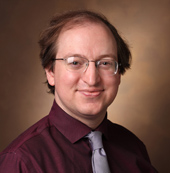 Lehman is one of three early career scientists to receive a LUNGevity Career Development Award in 2016.

“This grant from LUNGevity provides vital support for small-cell lung cancer research and career development, and I am deeply honored to be selected for this award,” Lehman said.

The grant supports Lehman’s research in small-cell lung cancer (SCLC), the most aggressive and deadly form of the disease. SCLC represents approximately 15 percent of all lung cancers and is responsible for more than 30,000 deaths in the United States and 200,000 worldwide annually. SCLC, with a five-year survival of less than 7 percent, recently was designated a “recalcitrant” cancer by act of Congress.

Chemotherapy is the most common treatment for SCLC and the disease initially responds to treatment, but resistance to therapy develops quickly and most patients die within a year. There are no approved targeted therapies for this form of lung cancer.

Lehman is studying how SCLC becomes resistant to therapy.

“Our preliminary data has identified multiple novel subpopulations of cells in small-cell lung cancer. We are working to better characterize this diversity by using a novel technique that can identify levels of more than 40 different cell surface markers simultaneously in individual cells. This will give us a signaling and surface marker map,” Lehman said.

He and his colleagues will then compare this newly created “map” with those from human tumors grown in an animal model before and after chemotherapy treatment to determine how these tumors change with treatment. They also will test new treatments based on destroying or disrupting specific subpopulations of cells in order to interfere with cancer growth, potentially leading to new, more targeted treatment strategies for SCLC.