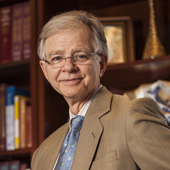 R. Daniel Beauchamp, M.D., chair of the Section of Surgical Sciences and the John Clinton Foshee Distinguished Professor of Surgery, has been selected to receive the 2016 Dr. Rodman E. and Thomas G. Sheen Award from the New Jersey American College of Surgeons (ACS) Chapter.

The award was established in 1938 by Thomas Sheen in the memory of his brother, Rodman Sheen, M.D., a pioneer in the field of radiology, to honor individuals who have made outstanding contributions to mankind in medicine and research. The Sheen Award honors a full-time working physician involved in ongoing teaching and medical research.

“It is a distinct honor to join the group of outstanding physician scientists who have been selected to receive the prestigious Sheen Award in the past,” said Beauchamp. “I am extremely grateful to my many colleagues and collaborators here at Vanderbilt University Medical Center for their ongoing support and for the opportunities that have led to this recognition.”

Beauchamp, who is also a professor of Cancer Biology and Cell and Developmental Biology, joined Vanderbilt as associate professor in the Department of Surgery and associate professor of Cell Biology in December 1994. In 1997, he was appointed as the John L. Sawyers, M.D., Professor of Surgery and the chief of a new Division of Surgical Oncology and Endocrine Surgery. Beauchamp was appointed as the J. C. Foshee Distinguished Professor of Surgery and Chair of the Section of Surgical Sciences, and Surgeon-in-Chief of VUMC in 2001. His current responsibilities also include serving as deputy director of the Vanderbilt-Ingram Cancer Center (VICC) and co-leader of the Gastrointestinal Cancer Program for VICC.

His primary research activities are focused on colorectal carcinogenesis, the biology of cancer-cell invasion and metastasis, and applying DNA microarray, next-generation sequencing and proteomic technologies to identify novel molecular biomarkers and therapeutic targets in colorectal and other malignancies. He has co-led one of the main projects in the Gastrointestinal Cancer Specialized Program of Research Excellence (SPORE) for 12 years, and his laboratory has been the recipient of continual R01 funding by the National Institutes of Health for more than 25 years.

Beauchamp has authored more than 145 peer-reviewed publications, in addition to numerous book chapters, reviews and commentary articles. He has served as associate editor for the “Sabiston Textbook of Surgery” since 1998. He has given invited presentations throughout the United States and around the world.

His numerous awards include election to American Society for Clinical Investigation, the Institute of Medicine (now National Academy of Medicine), Fellowship of the American Association for the Advancement of Sciences and the American Surgical Association Flance-Karl Award for Scientific Achievement. He has also received the Frank Boehm Award for Excellence in Teaching Continuing Medical Education at Vanderbilt University. Since 1991, he has trained and mentored more than 60 junior faculty members, research fellows and students in his research lab.

Beauchamp will receive the award during the December annual clinical meeting of the of the New Jersey ACS Chapter.