Nashville entrepreneur-turned-artist Cano Ozgener and his family have repeatedly faced cancer and its consequences, but rather than feel embattled, they’ve chosen to respond by creating beauty to share with others and by actively supporting the mission of the Vanderbilt-Ingram Cancer Center (VICC). 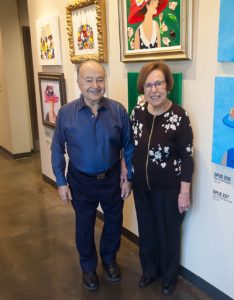 Ozgener and his wife, Esen, established the Esen and Cano Ozgener Research Fund in 2010. Their gift supports VICC investigators working in the field of tumor immunology, as well as the recruitment of research faculty.

The Ozgener family also gives their time; Cano serves on the VICC Board of Overseers, and daughter Aylin is a member of the VICC Ambassadors (formerly the Young Ambassadors). The family has also hosted VICC events, including the annual Cancer Survivors’ Celebration held in 2016 at the Ozgeners’ latest business venture, Oz Arts. A calm oasis within the otherwise industrial setting of Cockrill Bend, Oz Arts is a Nashville arts venue for contemporary performance and visual arts.

“The generosity of the Ozgener family is fueling opportunities for scientific breakthroughs and is an investment in our best and brightest minds in oncology research,” said Jennifer Pietenpol, Ph.D., director of the VICC, B.F. Byrd Jr. Professor of Oncology and Executive Vice President for Research.

“We appreciate their confidence in our efforts as we move toward our goal of curing cancer. Their support will have a positive, far-reaching impact for generations to come.”

In 2002, a troubling lump on his neck led to Cano (pronounced Johno) Ozgener’s diagnosis of non-Hodgkin lymphoma. Following chemotherapy, he remained cancer free for three years. The cancer returned in 2005, and he received a stem cell transplant. In 2011, he underwent heart surgery, including a triple bypass and replacement of his aortic valve that had been damaged by chemotherapy. More recently, Esen Ozgener received a diagnosis of stage 1 breast cancer in 2015, and Cano Ozgener was diagnosed with prostate cancer in early 2016. They are both being treated at VICC, and rather than retreat from the world due to these additional diagnoses, the Ozgeners have reacted by actively supporting the work of Vanderbilt investigators.

“The cause is very big,” Cano said, with his unwavering, trademark enthusiasm. “The cause is to beat cancer, and I truly, truly believe we can. It will take more money, more research, more brains, more equipment. But when you attack cancer worldwide with good planning, it can be beaten. I’m very proud of the successes at Vanderbilt-Ingram Cancer Center, but we’re just halfway there.”

Because he lived through what he called “the mother of all chemo” when he received his stem cell transplant, Cano is excited about supporting research in immunotherapy, which can replace chemotherapy with targeted immunotherapy that attacks only cancer cells. Cancer tumors develop a mechanism whereby they express components on the surface of their cells that tell the immune system to ignore the tumor. New immune therapies are antibodies that recognize those molecules on the tumor and call the body’s T cells to the tumor to kill it.

The Ozgeners’ gift has helped VICC increase research efforts in tumor immunology, as well as to successfully recruit faculty such as Jeffrey Rathmell, Ph.D., who now heads VUMC’s Center for Immunobiology, said Scott Hiebert, Ph.D., professor of Biochemistry and Medicine, associate director for Basic Research and associate director for Shared Resources at VICC.

“Philanthropy also gives us the ability to gain that primary data that an investigator can then use to go out and get extramural funding from the NIH, so it’s really the lifeblood of the research we do here at the Cancer Center,” Hiebert said. “Without that, we don’t have the ability to be competitive.”

Cano and Esen, who have been living in Nashville since 1968, feel it’s important to give back to the city and country that have been so supportive of them, and funding research is just one element of the family’s legacy of giving. They’ve also become emissaries of art in Nashville as a result of their experiences.

There came a point during Cano’s treatment for non-Hodgkin lymphoma when he realized that using less traditional tools such as music and art to battle cancer were just as important as the medicine physicians were relying upon to heal his body. Ozgener and his wife decided they wanted to bring more opportunities for artistic expression — and healing — to the city they love.

Ozgener had begun his career as an engineer for DuPont Corp., where he developed machinery that created Dacron fiber. Then, he and his family established C.A.O. International, one of the country’s top manufacturers of premium cigars. They sold the successful company in 2007 but still had a production facility in North Nashville. It was at this location in 2013 that the family established OZ Arts as a gift back to the country that has been so hospitable to them.

Cano also began painting, and he pointed to an ornately framed work in his office that he recently completed. Dramatic purples, blues, greens and yellow eddy together in a work titled Opus 301 “Homage to Monet: The Romantic Pond,” a masterful nod to the French Impressionist’s water lilies series.

“I was unfortunate to have cancer, but now I look at it as a positive, life-changing experience,” Ozgener said. “I came to the edge of life where you learn very fast what life is truly about. That’s why I like to paint with lots of vivid, happy colors.

“With this new diagnosis of prostate cancer, I’m spending more hours painting, and leaving my treatment to my very capable and skilled medical team.”

Next Post: Study to explore lymphedema self care for cancer survivors