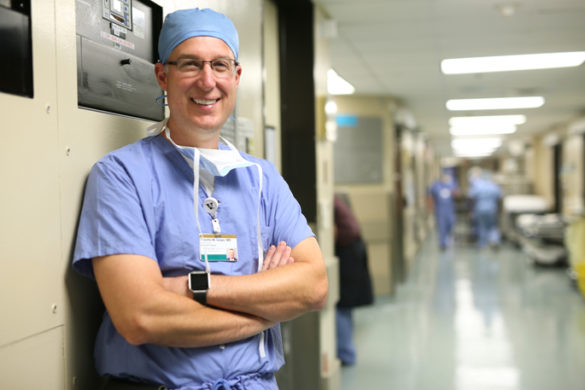 Neat stacks of paper are lined up on the desk of Timothy Geiger, M.D., with each stack representing a challenge. For example, one sheet has a flow chart sketched on it — Geiger’s musing on ways to more efficiently use Vanderbilt University Medical Center’s (VUMC) operating rooms, matching the best locations with case types and surgical teams.

At 39, Geiger wears several significant leadership hats at VUMC. While he claims he’s “lucky and one of the most blessed people you’ll ever meet,” his bosses don’t hesitate to credit his hard work for his successes.

“Dr. Geiger has been a visionary leader on the Colorectal Service, who has developed key collaborations with colleagues from his service, the Department of Anesthesiology and the nursing staff to drive standardization and improvements in the quality of care for patients undergoing colon and rectal surgical procedures,” said R. Daniel Beauchamp, M.D., chair of the Section of Surgical Sciences and the John Clinton Foshee Distinguished Professor of Surgery.

“In his new role as medical director of the Surgery Patient Care Center, we expect his collaborative systems and process approaches to operational management will enable us to achieve performance improvements across the entire Patient Care Center.”

In 2014, Geiger worked closely with Matthew McEvoy, M.D., associate professor of Anesthesiology, to develop an Enhanced Recovery After Surgery (ERAS) protocol for colorectal surgery that led to improved outcomes, decreased the average time patients remained in the hospital by a day, reduced the use of opioids for post-operative pain by 90 percent, and increased patient satisfaction. ERAS protocols have now been implemented into many other areas of the Medical Center, including breast reconstruction and orthopaedic surgery.

“We tried it out on a small group of patients, and we had a huge, phenomenal result,” Geiger said. “Patients didn’t have pain after surgery — they were feeling really good. I would have to go over to Au Bon Pain to find my patients when I tried to do rounds. It was really interesting to see.”

In 2013 Geiger also co-led a task force to reduce surgical site infections among patients undergoing colorectal surgery. By reducing variations in surgical practice and post-operative care, the group was able to reduce the incidence of these infections by a full 50 percent.

Geiger has always enjoyed analyzing existing processes, identifying weaknesses and finding better ways to get things done, and this was one reason Seth Karp, M.D., H. William Scott Jr. Professor and chair of the Department of Surgery, tapped him to be chief of the Division of General Surgery in 2016.

“Dr. Geiger demonstrates tremendous thoughtfulness and maturity in his decision-making,” Karp said. “His goal is always the care of the patient, and he has had remarkable success in implementing systems to achieve this goal. He has a keen intellect and is able to cut immediately to the heart of complex issues.”

If you ask Geiger why he decided to become a physician, he’ll jokingly tell you his mom — and Dr. Alan Quartermaine — are definitely to blame.

“As a kid, my mom watched the soap opera General Hospital,” he laughed. “I vividly remember, at 4 years old, watching the Quartermaines. I just always knew I wanted to be a physician. I even had one of those plastic doctor kits growing up. Now, my kids play with it, giving us pretend shots and listening with the stethoscope.”

“I originally thought I would be an orthopaedic surgeon so I could be on the sidelines during football games,” he said. “But when I started doing some research, I figured out that wasn’t exactly what I wanted to do in terms of a specialty.”

One of his residency instructors, a surgical oncologist who performed colorectal cancer surgeries, inspired him to pursue this area of surgery. He particularly enjoyed minimally invasive surgery. In 2009, Geiger moved with his wife, Kali, to Boston, where he would complete a clinical fellowship in colon and rectal surgery at the Lahey Clinic. He came to Vanderbilt in 2010, where he was named clinical director of the Colon and Rectal Surgery Program in 2015.

The program was established at VUMC in 2002 with one dedicated surgeon. Now, the group has five attending surgeons, three advanced practice nurses and additional clinical and administrative support, and is one of the fastest growing colon and rectal surgery practices in the region. In fiscal year 2016, the Colon and Rectal Surgery Program had 5,198 clinical patient visits and performed 1,017 surgeries.

“There are multiple things I like about this field,” Geiger said. “One, it is generally very complex in terms of patient care. I like that because I enjoy trying to figure out how to fix problems. Another reason is that our patients are so appreciative of what we do. Usually by the time they end up meeting with a colorectal surgeon, they’ve likely seen two or three other people that maybe didn’t know what to do. When we can say, ‘Here’s how we’re going to move forward to solve this,’ they are very grateful.”

With two new providers added in the Colon and Rectal Surgery program in the last six months, Geiger said he’s excited about the ability to increase the group’s research publication and presentation output, as well as services for patients.

“I want Vanderbilt to have a powerhouse colorectal program,” he said. “I would like for someone to say, ‘Oh, Vanderbilt Colorectal. It doesn’t get better than that!’ I would also like to continue to create processes that allow people to do what they do best, whether it is physicians operating and taking care of patients or getting systems optimized.”

Geiger laughed when asked if he has hobbies when he’s away from the Medical Center. He only managed to get to a golf course four times in the past few years. For now, he says his favorite pastime is being Dad to 5-year-old daughter Kinsey and 3-year-old son Davis.

“One day I’ll pick up a hobby, but for now I just play with my kids,” he said. “They are both at that age where they are so excited when Daddy comes home. We’re always active, whether it’s playing soccer in the back yard, or going to the pool. I’ll do anything to get outside. I spend most of my day in the OR or in the clinic, and there are no windows, so I crave anything to get outdoors.”

While Geiger originally planned on practicing medicine and raising his family in the Midwest, he and his wife have fallen in love with Nashville.

“Nashville is such a unique city. I have a hard time describing it to people other than saying it’s the best place in the world. We love it.”