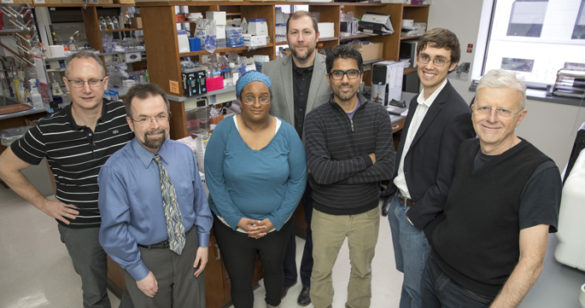 With the help of a drug formerly used to treat HIV/AIDS, researchers at Vanderbilt University Medical Center (VUMC) have found a way to make melanoma cells more vulnerable to targeted anti-cancer therapy.

Since the AIDS drug is already FDA approved, clinical testing in melanoma patients could potentially begin sooner than if it was a novel compound, said Joshua Fessel, M.D., Ph.D., corresponding author of the group’s findings, published last month in the journal Scientific Reports.

Fessel, assistant professor of Medicine, Pharmacology and Cancer Biology, said the study reflects the aim of the federal “Cancer Moonshot” Initiative: to achieve a decade’s worth of progress in only five years.

“One way to do it,” he said, “is to repurpose old drugs for new uses.”

Melanoma is the most malignant skin cancer. Roughly half of melanomas have a mutation in BRAF, a gene involved in directing cell growth. Drugs that inhibit BRAF signaling can prolong patient survival, but in many cases relapse occurs when the tumors become resistant to BRAF inhibitors.

First author Keisha Hardeman, a graduate student in Cancer Biology, wanted to know whether development of resistance was related to the tumor’s cell metabolic profile, or how it generates energy needed to grow.

Cells produce energy in two main ways: by breaking down glucose in the mitochondria in the presence of oxygen, and through glycolysis, by breaking glucose down in the liquid part of the cell without oxygen.

In a study that formed the basis for her dissertation project, Hardeman correlated the metabolic profiles of melanoma cell lines containing BRAF mutations with their rates of proliferation under different treatment concentrations.

The analysis showed that cells dependent on glycolysis for energy were more likely to respond to BRAF inhibition. The next step was to try to shut down mitochondrial energy production and force melanoma cells to rely solely on glycolysis.

Most mitochondrial inhibitors are too toxic to give clinically, but Fessel recalled that the old anti-retroviral drug zalcitabine, which has been supplanted by better HIV/AIDS treatments, also was toxic to mitochondria.

The researchers demonstrated that zalcitabine forced melanoma cells to rely exclusively on glycolysis. When that happened, the cells became more vulnerable to BRAF inhibition.

“I like to think of it as putting them in a box and keeping them from being able to get out,” said Hardeman, who will defend her dissertation later this month.

Fessel said the study reflects Vanderbilt’s interdisciplinary and collaborative approach to discovery science and its emphasis on diversity as a way to attract bright students from a broad range of backgrounds and experiences.

Her project combined systems biology approaches to quantify aspects of cancer progression that she learned in the lab of co-author Vito Quaranta, M.D., professor of Cancer Biology, with techniques for studying mitochondrial function and cellular metabolism she learned in Fessel’s lab.

“I’m really proud of the work that Keisha has done here,” Fessel said. “I think the science has great potential to be translated fairly directly into human studies that could have a real impact on how melanoma is treated.”