Musician, physician collaborate to create message of hope on film

Radiation Oncologist Mark Stavas, M.D., far left, visits with Asieren Boyce, Little Richard and Jesse Boyce. Stavas began working with the Boyces and Little Richard to document Jesse Boyce’s journey with cancer and his ability to find joy despite not having a cure. (photo by John Partipilo)

Nashville musician and producer Jesse Boyce compares the anxiety he felt just before receiving palliative radiation therapy to the jitters he often experienced before going on stage. The instant treatment began — and as the first note rang out — his anxiety was replaced by a sense of peace and determination.

Boyce, whose incredible career as an instrumentalist, bandleader, vocalist and songwriter includes a long stint alongside his mentor and friend Little Richard, is being treated at Vanderbilt University Medical Center for recurrent, incurable prostate cancer. His journey has been documented in a feature film, “Intentional Healing,” premiering at the Nashville Film Festival on April 21, with a second screening on April 25.

The 40-minute film was produced by Vanderbilt radiation oncologist Mark Stavas, M.D., who wanted to communicate a treatment philosophy that focuses on wholeness, regardless of a cure, and that embraces everything an individual brings to the table that can help improve his or her quality of life.

“Medical professionals often set the tone for care, which is very disease-directed,” Stavas said. “For example, in oncology, we use words like ‘mitotic catastrophe’ or ‘synthetic lethality.’ The whole concept of targeted therapies focuses on the cellular level, but that really breaks down at the edges of life, when you really need to start thinking about the human experience of care.”

Stavas decided to create a film for both patients and medical providers — not a staged, run-of-the mill healthcare piece — but one that would connect with the spirit and illustrate how people can pursue “intentional healing,” even as the end of life becomes imminent. He had little experience in the field but luckily was able to draw upon a wealth of family talent. One of his brothers, John Stavas, is a film director in Los Angeles. Another brother, Andrew Stavas, is a member of the popular indie rock band Kiev. Both were happy to help.

“I wanted to create an inspirational film to say that people have lives outside of medicine and the clinical setting, and we need to tap into that as well to help guide our therapeutic choices beyond just science and data,” Stavas said.

When he approached Radiation Oncology Chair Lisa Kachnic, M.D., with his idea she immediately offered her support. She believes the film is important because it raises much-needed awareness about how patients face terminal illness. 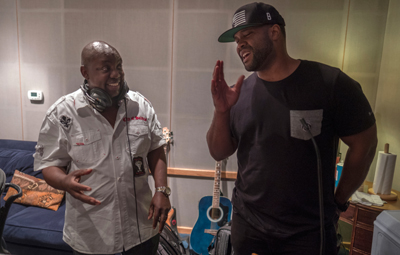 “While cancer can shatter an individual’s identity and psyche, many factors such as family, spirituality, meditation, arts — and here in Nashville, music – may heal the patient and make them feel ‘whole’ again, prepared to face the end of life,” she said. “As radiation oncologists, we cannot be seen as mere technologists in the end of life care of patients, ‘pressing the button’ on a radiation machine to deliver cancer therapy. Rather, we must address the whole patient. And this is what Mark beautifully does. Cancer doctors must learn what is most valued by our patients in order to best contribute to their care and provide them with the greatest quality of life during their last weeks.”

When Stavas asked Boyce if he would be interested in telling his story, he agreed, and the project gained momentum as storyboards were drawn, studio time booked and a crew assembled, including Kachnic’s daughter, Samantha Englert, who served as assistant director.

After his initial surgery at Vanderbilt in 2003 for advanced-stage prostate cancer, Boyce had moved forward with his life, mentoring many young Nashville musicians, teaching music and life skills to underserved youth, and lending his expertise to countless music industry projects. He also serves as minister of music at Gordon Memorial United Methodist Church in Nashville, and his musical protégées often join him on stage during worship services.

He had co-written a song, “Dance Again,” with one of his mentees, Phil Hughley (Gtar Phil), and in 2016 they were recording it when Boyce experienced agonizing pelvic pain and bleeding. He was rushed to the hospital where he learned his cancer had returned and was now classified as incurable. The disease has since spread, and he continues to receive treatment to minimize its impact. He credits his Vanderbilt medical team for continually offering options for hope and said he’s been treated “like a king” throughout treatment.

In the film “Intentional Healing,” the meaning of “Dance Again,” becomes even more poignant as Boyce is determined to complete the recording. Hughley and Boyce return to Ocean Way Nashville Recording Studios, and Kevin Sylvester and Wilner Baptiste of the Universal Music duo Black Violin join them to complete the final tracks.

“Here’s what I want you to do,” Boyce tells the musicians. “Once we learn the song, I want you to find your place and make your statement. You should interpret it through the eyes of someone who is struggling with an illness. Think about James Brown and Bobby Byrd. They didn’t even have a chance because their struggle was short. They were friends of mine… the struggle piece, that’s the first part of the song. The ‘strength’ part comes when we’re going through the transition. There’s sunshine. There’s hope.”

Directed by Boyce, the musicians lay down a slow jam that builds into an exuberant groove of joy that becomes the documentary’s theme song. As he hears the song’s elements weave together, Boyce’s trademark grin materializes, and he dances to the beat.

Recording the song was important for his healing, but Boyce also credits his mentor, Little Richard, for being a continual support for him and his wife, Asieren. When Boyce returned home after his initial cancer surgery, Little Richard’s limo pulled up in his driveway, and the artist came in to eat Thanksgiving dinner with the family. On screen, Little Richard makes a rare appearance to share his thoughts on hope, mortality and how we should “walk through our days.”

“He cried when he heard I had cancer,” Boyce said. “He’s been through this whole process with me, and it speaks volumes to me that he agreed to be part of this film. He prays with me, he calls me, he lets me know he loves me. He’s the real deal.”

Reflecting on the completion of “Dance Again” and the documentary “Intentional Healing,” Boyce says he’s achieved a goal that’s much more than a career milestone.

“It makes me feel as though I have accomplished what I set out to do, which was to get beyond a gold record to achieve a gold standard of life,” he said. “And not only for myself, but for other people, to help encourage someone else to live that quality of life and to sustain their lives.”

“Intentional Healing” is part of the Tennessee First Films sessions at the 2017 Nashville Film Fest. It will be shown at 8:30 pm on April 21 and April 25 at the Regal Hollywood 27 at One Hundred Oaks, 719 Thompson Lane in Nashville. Tickets can be purchased at www.nashvillefilmfestival.org beginning April 12.