Scientists studying the body’s cancer-fighting T cells have a serious problem: When they culture them in the lab, the T cells sit around at equilibrium, waiting to bump into cancerous cells. But that’s not how they operate inside the body. There, they are motorized little bloodhounds, actively seeking out infected cells.

Their work, which represents a leap toward developing killer T cells to attack tumors, will appear in this week’s early edition of the Proceedings of the National Academy of Sciences.

Titled “Mechanosensing drives acuity of αβ T cell recognition,” it’s the result of more than 1,000 individual experiments aimed at triggering T cells when they are given a humanly undetectable push.

The research promises to change what immunologists are looking for, because it demonstrates that T cells can trigger killing of cells with far less evidence of infectious pathogens, physical damage and malignant transformations than researchers believed, Lang said. Now, researchers will look for T cells that demonstrate potential for the strongest binding when they’re flung at damaged cells.

“We can, for the first time, pick the closer on the baseball team who can reliably pitch fastballs,” Lang said. “Which T cell do you pick, which one do you put back into the patient to fight their disease? Maybe you get lucky and pick the right one. With these new tests, we can measure the interaction under the native, energized state. We’ve found the sweet spot for reliably triggering them.”

He said the research has personal significance to him because his wife has fought thyroid cancer for years—she is currently cancer-free—and he’s lost other relatives to cancer in quick succession.

Lang’s team collaborated with Harvard’s Dana-Farber Cancer Institute, where researchers have been studying T cell receptors that distinguish abnormal cells from normal cells since the early 1980s. Dr. Ellis Reinherz said he worked with Lang when the engineering professor was at MIT, just prior to Vanderbilt. They used optical tweezers—highly focused laser beams—to help characterize the T cells’ structure and perform single-molecule analyses.

“What Matt has shown here is that, in the presence of force, the ability of a T cell to recognize its target is dramatically enhanced,” Reinherz said. He warned against treating the new research finding as a panacea, but characterized it as enormously important fundamental science. 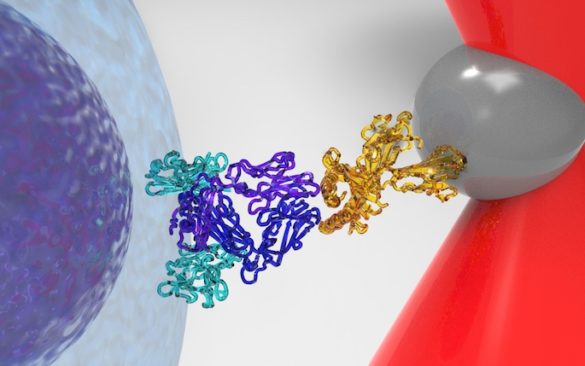 A trapped bead (right) decorated with a pMHC ligand is actively placed on a T cell (left) and pulled to facilitate recognition by the T cell receptor complex. (Lang laboratory)

“Coming down the pike, this sort of technology will be useful in honing our way of best identifying tumor antigens and developing rational methods of discerning T cell receptors one from another on bond strength,” Reinherz said. “We may be able to improve the quality we’re generating, characterize them and define with great authenticity pathogen-derived responses.

Our work is fundamental to developing antigen-specific, killer T-cells.”

Feng and Lang performed their experiments using optical tweezers to pick up microscopic spheres and coat them with the same peptides as found on diseased cells. They would then place the spheresonto T cells.

With no force, the T cells were thought to go through their typical lab routine of lackadaisically sniffing out a peptide, then another, then another in a process requiring hundreds or even thousands of binding events  before their receptors bound to enough peptides to activate the immune response.

Then Feng and Lang applied 10 piconewtons of force to the T cell, equivalent to the gravitational force exerted by dropping 1/1,000th of an eyelash. A special dye applied to the T cell immediately revealed an increase of intracellular calcium, which shows that it is activated. Feng and Lang began removing a peptide at a time as their experiments progressed and learned that, with this tiny amount of force, the T cell can do its job when contacting as few as two peptides.

“With the very precise microscopes we have, we didn’t see repetitive binding. We saw a single binding event,” Lang said. “This paper is telling us about mechanism, about how the system actually works. It’s basically saying that we’re dealing with a mechanosensor that requires force to be activated. Strategically, it’s changing what we should be looking for.”

“In the emerging and very promising field of T cell therapy, these findings help us understand at a very basic level how therapeutic T cells are triggered to attack their targets,” he said.